Androgynous Suits and the Art of Dressing Authentically

Back to all ADVICE posts 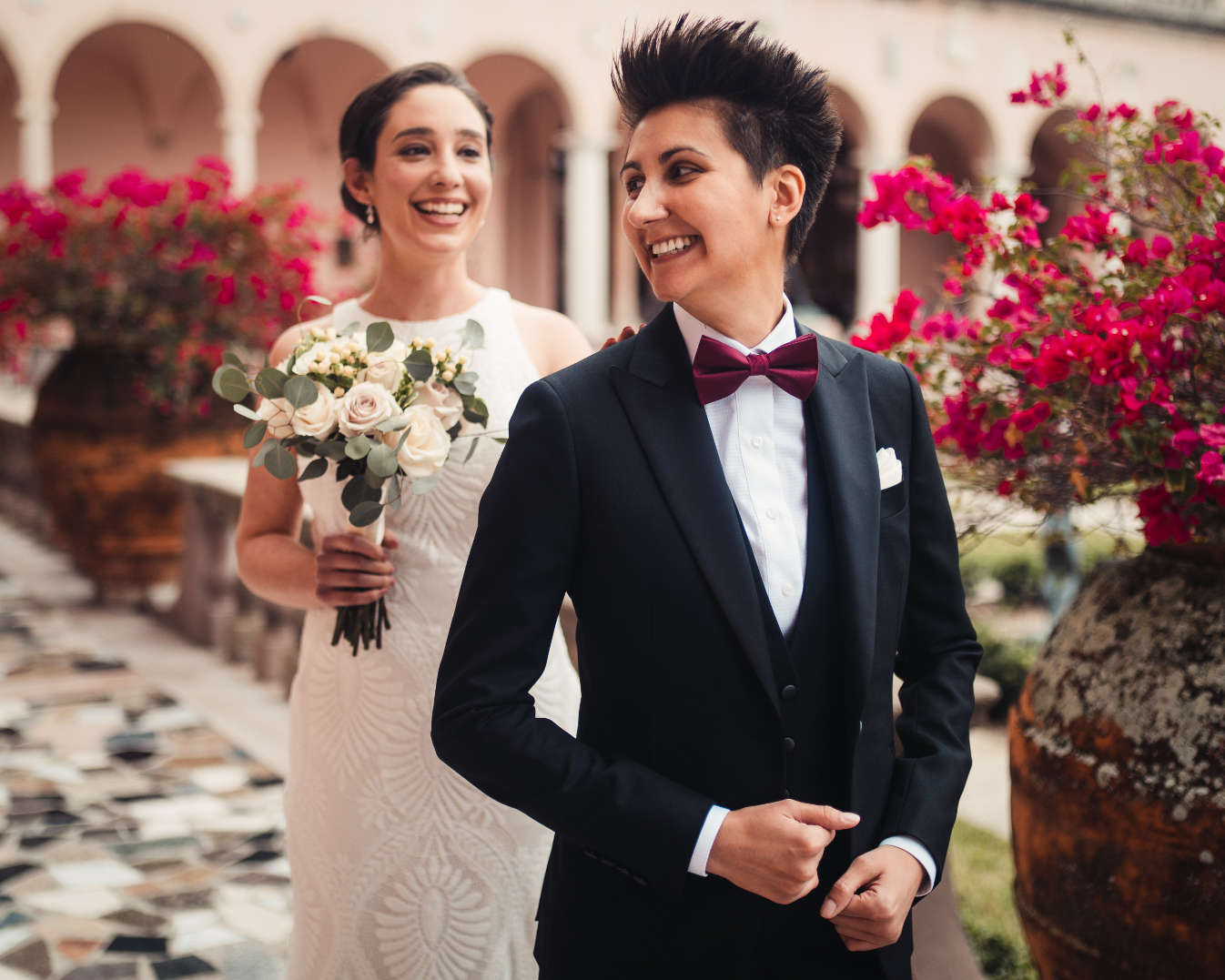 A great suit, a great client, and a great conversation about inclusivity, marginalization, gender expression, and authenticity. (With photos of Lesley Ann Shaw taken by Cat Palmer).

UPDATE: To celebrate Utah’s diversity, to support Utah’s LGBTQ+ non-profit organizations, and to promote greater allyship with marginalized communities, we have launched the “Wear it with Pride” program.

Lesley Ann Shaw was stylish to begin with.

Anyone who wears custom clothing probably is.

As all custom clothiers will admit, most of our clients are looking for something beyond the craftsmanship and heritage. They’re looking for something personal. A certain pattern or color. A flawless fit. They want a suit that is made specifically for them. A suit that reflects every badass inclination they carry. And for the effort of dreaming it up, they deserve nothing less.

“It actually was quite difficult, for me,” admits Lesley, “to pare down what I wanted.” Buying custom means opening the floodgates. Anything’s possible. In the end, “I wanted it to be strong, powerful, queer and approachable.”

The result is purely that. A dashing blue windowpane two-piece with deliberate accents and embellishments, over a gray houndstooth odd-vest, shaded by perhaps the greatest hat ever worn.

The monogram reads “Queer Resistance.” The button-holes are stitched with the blue, pink, white, pink, blue of the trans flag.

The cut pattern of the suit is best described as Androgynous.

WHAT IS AN ANDROGYNOUS SUIT, EXACTLY?

“Androgynous” is a complicated term.

And yet it’s so very very common sense. If you don’t want a masculine cut suit, or a feminine cut suit, then the suit you create is likely androgynous.

Often, an Androgynous Suit aims to blend and bend all things gender expression, ultimately removing the binary constructs society has built around gender. It can hide curves or accentuate them, narrow the shoulders or broaden them, elongate the torso or shorten it.

From a technical perspective, an Androgynous Suit can be assembled in any number of ways.

It starts with a conversation between the client and the personal clothier. They discuss style choice, they discuss pain-points (what don’t they love about the last suit they wore), and they discuss silhouette. Thirty-plus measurements are taken to ensure a flawless fit.

This gives the clothier a good sense of the client’s vision for the suit, and of how to bring it to life.

Before the suit pattern is put to fabric, a number of adjustments are made to meet this vision. The length and the stance of the jacket, the lapel width, the darts (or lack thereof), the cuffs, and the pleats (or lack thereof) can all be manipulated.

The resulting suit is often far more meaningful and personal than anything that can be purchased off-the-track and altered. Lesley Ann Shaw perhaps put it best: “There is so much power in being able to help someone dress affirmingly and in such a safe and celebrated way.”

It’s a more than reasonable request, and it’s a request that only custom clothiers can address.

Let’s talk about why …

THE PARADOX OF THE EVERYDAY SUIT

Few other articles of clothing adhere to the gender binary as as strictly as the everyday suit.

Most suits worn by men aim to make them look more masculine. Often that is the manufacturer’s intention. Broadened shoulders, powerful chest, athletic core. Wool, thread, and cotton standing in for musculature and frame.

Most suits worn by women emphasize the curve of the hips and bust. The arc of the spine, and every delicate taper prescribed.

Beyond some subtle variations in style, it’s easy to tell a suit that was manufactured for men from one intended for women. It’s either/or. Ones and zeros. The “everyday” suit as you’ll find it in the everyday department store has a very narrow spectrum.

And this is so very counterintuitive. A suit jacket alone uses on average 100-plus individual pieces of fabric, sewn together to create its shape. Each piece of fabric can be adjusted and manipulated for a unique fit. There’s no need for a suit to conform to any preconceived or arbitrary gender template. And yet here we are.

We can attribute this to modern mass-production.

In the 1850s, sewing machines began to operate in commercial capacities. By the 1950s the vast majority of suits were in some way machine-produced. To make all of this affordable and profitable on a large scale, it was important to limit sizing to a standard range.

And it was important to limit cut to either masculine, or feminine.

THE RISE OF AFFORDABLE CUSTOM

This templatized approach was a departure from longstanding bespoke methods, wherein every suit is fitted to the individual through a painstaking and highly skilled tailoring process.

What the everyday suit lost in individuality, it certainly gained in affordability. Where a custom bespoke suit might cost multiple thousands of dollars, off-the-rack suits could be had in the low hundreds. Thus, Ready-to-wear took center stage.

To win that individuality back for the suit, custom tailoring now had to bridge the price gap. Through a combination of old-school expertise, deft attention, and one-off custom manufacturing technology, this gap has since been bridged soundly … and made-to-measure is far more common today.

The obvious benefit here is that a flawless fit and extensive fabric choice can now be reasonably obtained by all manner of shopper.

But a far more resonant, far more emotional benefit comes along for the ride. Strict conformity is no longer a requirement of wearing suits.

The suit is now, easily, personal.

BEING COMFORTABLE IN YOUR SKIN

The relationship between humans and their clothing is profound.

With deep ties to cognition and identity, what we wear has long since moved beyond a simple need for warmth and protection. It calms us. It excites us. It starts conversations. Or it helps to blend us into whatever backdrop we choose.

The effects it can have on marginalized communities run deeper still.

I had the pleasure of speaking with Lesley Ann Shaw earlier this year, after their suit was completed and delivered in full. Through the lens of custom suiting, we discussed intentionality, dressing in an affirming way, and the nature of being comfortable in how one presents to the world around them.

“My overall take on style and comfort is that it is a privilege,” says Lesley. “And a rarity for the more vulnerable communities.”

Lesley knows this dynamic all too well. An activist and an advocate for the underserved, Lesley is both one of the marginalized, and a diligent member of the non-profit associations devoted to fighting for their rights.

“Having nice and affirming clothing is a huge barrier,” explains Lesley. “When you grow up being socialized and told, repeatedly, to be one way and the only way you know how to survive is by assimilating, it sets you up for a lifetime of heartache and pain.”

But, on the other hand, living authentically can subject a marginalized individual “to harassment, often violence.”

This is a harrowing truth.

The broader emotional implications that affirming clothing can have on the LGBTQ+ community, in particular, really shouldn’t be surprising. In fact, these implications have been the subject of more and more media attention in recent years.

In 2016, HBO produced and aired “Suited,” a documentary featuring the wonderful team at Bindle and Keep, a made-to-measure custom suit shop in Brooklyn, NY. While Bindle and Keep caters to clients of every ilk, the majority of their suits go to the LGBTQ community.

At times throughout the documentary, Bindle and Keeps clients are vulnerable in ways that many of us have never experienced. Brought to tears, seeing themselves dressed in an affirming way for the first time, each client had their own history, and needs that could only really be solved through, of all things, custom tailoring.

This is revelatory in so many ways, and bit sacred to see, even on film. It’s pure, quickening, heavy metal.

In light of these stories, it’s easy to emphasize how incredibly important it is to have access to affirming clothing, and it probably isn’t surprising to find that access in a place like New York’s Brooklyn.

But custom clothing is a (slowly) growing trend in smaller cities too. Safe space, carved out where maybe it wasn’t there before.

THE AFFIRMATION OF THE EXPERIENCE

Lesley speaks often on matters of safe space, of centering the marginalized, of being an ally. These are responsibilities any custom clothier should treat with divine earnest.

“Being fitted for a suit is an intimate experience,” says Lesley. “Ensuring a safe & consensual environment is paramount to the affirmation of the experience.”

And it’s all the more important when literally, physically measuring another individual — a necessary step in creating something like a tailored custom suit.

“Society, at large, has been socialized in non-consenting ways,” says Lesley. “We do not always know what levels of trauma someone may have been through, so consent creates that intentionality and space which reduces triggers and, as a result, honors one’s own power over their own body.”

It should go without saying. We know that it doesn’t. Not always. For any clothier, it’s worth both focus and attention.

And the broader concept of safe space is worth focus and attention for the community at large, too. In that respect, Salt Lake City (where Tailor Cooperative operates) seems to be aware of this. There’s a good amount of cultural maturity at play here. And still some work to be done.

“Salt Lake has made a lot of progress in the past decade from being a leader in same-sex marriage to having one of the queerest city councils in the U.S.,” Lesley reminds us. “However, we still have leaps-and-bounds to go regarding true intersectionality.”

Despite the passing of same-sex marriage legislation, for instance, “there have been more anti-transgender bills introduced than ever before, so the most marginalized continue to be even more marginalized.”

This is a worthy battle to be fighting, and a shared responsibility in any community. “Those with more privilege must continue to create spaces, and ways to provide those safe and affirming experiences for the more vulnerable.”

Of course, it’s a much bigger problem than simply providing clothes that fit well, but any custom clothier will admit to the sincere role of individual and intentional style in this much much bigger picture.

In its own small way, it’s perhaps reassuring to know that androgynous clothing has been in very much increasing demand these last years.

There’s even a growing mindset that androgynous clothing is less a trend than the direction of a near-future status quo.

Androgynous, as a style designation, thus becomes a moot point at some stage. Individuals will simply be given far-reaching, intentional control over how they dress and present, and there will be fewer and fewer misconceptions prescribed against it.

This clears the road for the notion of constant authenticity, in how we dress.

Custom clothiers often speak of the concept of “anima,” which refers to a garment’s charming humanistic qualities — one example being a hand-sewn button-hole, rather than one that is sewn by machine.

When present in clothing, it is said that the subtle nuance of anima helps to make the wearer more relatable, more honestly human, than someone whose clothing is entirely, perfectly machine-made.

In our opinion, nothing bestows more anima upon a tailored suit than to have it worn authentically, by a client who designed it with intention and every ounce of their own, rich, personality. Clients who are, like Lesley Ann Shaw, one-thousand percent rockstar.

It’s well worth noting, the literal translation of anima is “soul.”