Back to all news updates 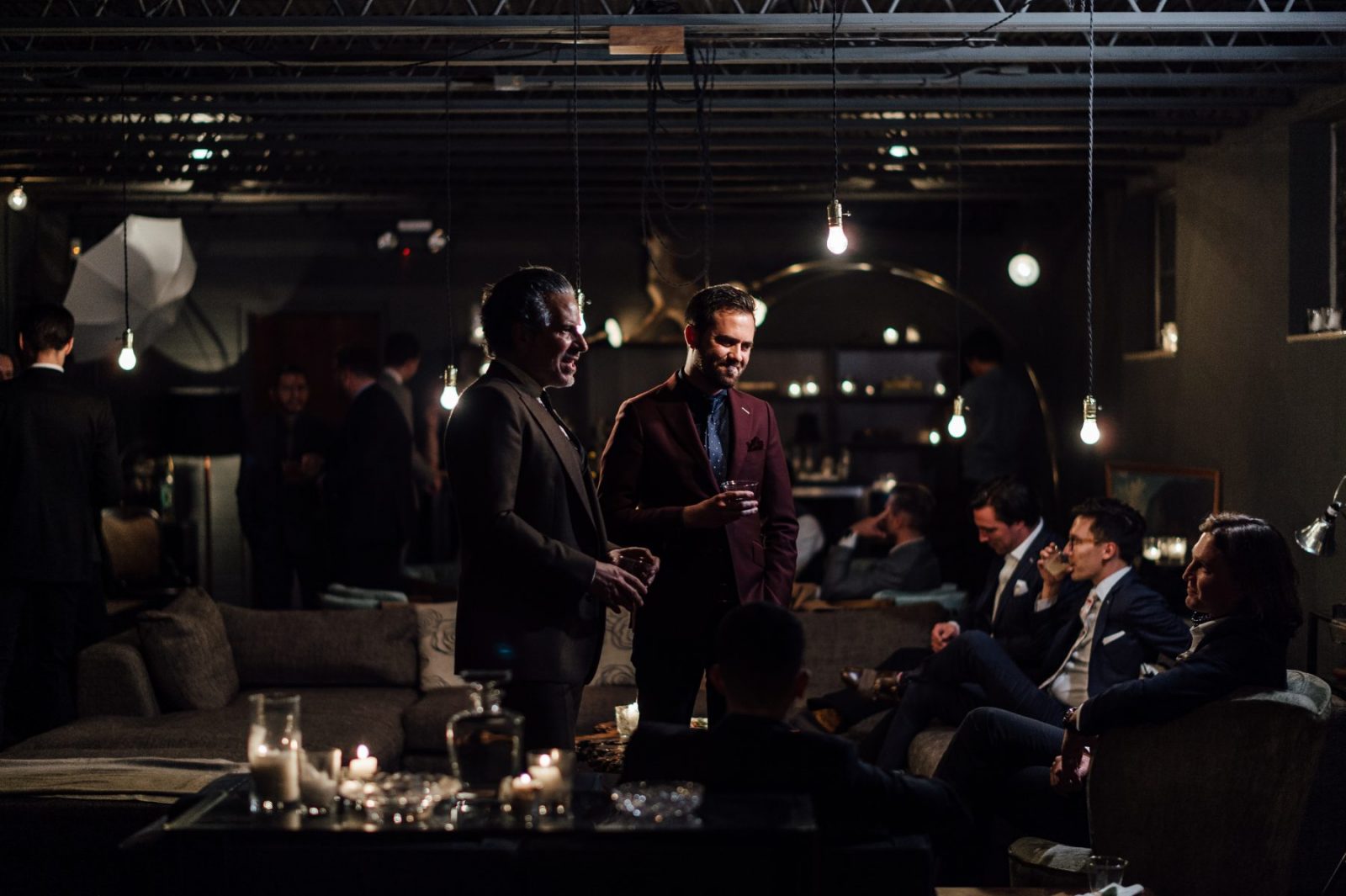 A wonderful side-effect of owning custom suits is that you’ll always be on the lookout for another good excuse to wear them.

Of course, any occasion will do, from dining out to a visit with the family. But there’s nothing quite like dressing to the nines for an occasion that specifically demands a good suit. A concert. The opera. An after-hours networking group, or club.

For the latter, we might recommend The Kind Sirs.

On the evening November 15, a small group from Tailor Cooperative had the privilege of attending the inaugural meeting of The Kind Sirs, a club for well-dressed gentleman from the greater Salt Lake area, seeking like-minded (and like-styled) peers. Their mission is formal style, charity, and a taste for the manners of yesteryear.

Formed by cityhomeCOLLECTIVE realtor (and ultimate style connoisseur) Joseph Tuenge, The Kind Sirs had been a long time in the making…and is a welcome addition to our list of occasions that demand a great suit.

We sat with Joseph Tuenge to discuss the Salt Lake City fashion scene, what it means to be well-behaved, and the origins of The Kind Sirs. Here is what he told us:

Q: HOW DID THE IDEA FOR THE KIND SIRS ORIGINATE?

A: The Kind Sirs first began as a men’s fashion blog in 2013 in Phoenix, Arizona. The goal of the blog was to feature fashionable men and write about gentlemanly ideas. It was a decent success, but I soon found out that it was a pretty lonely affair. I desperately searched for other outlets, but came up empty handed. So I went back to the drawing board and began concepting the idea of a meetup group. It started small, with just a few like-minded friends and I getting properly dressed for morning coffees, or eating at fancy restaurants. Super small-ball stuff.

My wife and I decided that Phoenix wasn’t our ‘growing old together’ place, so we picked up and moved. We found our home in Salt Lake City and I landed with the most inspiring, influential, and compatible workplace ever – as a real estate agent with cityhomeCOLLECTIVE!

Cityhome sure has a beat on community involvement, and really helped to rekindle my aspirations for The Kind Sirs. So in late 2016 and early 2017, I reached out to and interviewed several men in the SLC community whose reputations preceded them. To my delight, they were just as ecstatic about the idea as I was. It took a long time for the idea to be actualized, but I am proud to say that we were finally able to host our first, officially organized meeting on November 15th, 2017.

We had over twenty members in attendance, and “wow” was it incredible. Though many of us strangers to each other, we connected with real intention. We spoke business, fashion, community involvement, and quite generally had a fantastic time – all in full suit.

Q: HOW WOULD YOU DEFINE THE WORD “GENTLEMAN” TODAY?

A: Lost. Unfortunately society doesn’t seem to have the same requirements as it once had, and because of that, men have become extremely lax. This can be seen in both dress and behavior. Maybe I’m old fashioned, or maybe I’m just growing old, but I’ve always romanticized the idea of a gentleman. It’s an earned classification; a given title. As men, we should consider it a great honor to be considered as such.

Also, I wouldn’t be comfortable in trying to redefine the word in any way. It has already been defined by the great men of yesteryear, and now it is up to us to uphold such a standard. I will however say one thing, it is the absolute antonym of the YOLO movement.

Q: YOU EMPHASIZE THE HALLMARK TRAITS AS BEING WELL DRESSED, WELL MANNERED, AND “WELL DOERS.” WHY ARE THESE SUCH KEY CONCEPTS FOR THE KIND SIRS?

A: When I was originally concepting the idea of The Kind Sirs, I wrote a long list of words that I wanted the club to embody. I realized that most of these words could be placed in these three groupings. The Kind Sirs members should be comprised of men that strive for excellence, therefore each of categories should be done “well” at the very least, and we take them very seriously.

Well dressed being defined as sporting a tailored and slim fitting suit, complete with neckwear and dress shoes.

Well mannered meaning that we are to be men that exemplify couth, deference, politeness, and and overall high (natural) character. We are not foul-mouthed hooligans; we are not rude or obnoxious; and we are not arrogant or pretentious in any sort.

Finally, and most importantly, we are to be welldoers. Meaning that we are to be mobilized representatives of and in our community.

These are incredibly important to me.

And sure…these could each be had without the other, but in this group, we seek to be wholly adept in all gentlemanly phases. We lead by example.

Q: WHAT MAKES SALT LAKE CITY SUCH A GOOD FIT FOR THE KIND SIRS?

A: Salt Lake City is a wonderful city, full of wonderful people. We have a resilient community and we even have a ‘cool’ factor about us. It seems as though we’re just now starting to figure out that we are a big city – one that is sought after for many reasons. Well the secret’s out, and soon enough we might find ourselves trending along the lines of an Austin or Denver.

It’s all about establishing culture, and I really want to be a part of that!

A: Menswear is having a revival. The tailor’s shop seems to be the new barber’s shop – and that is so encouraging! Men are finally embracing their look, and finding that it can be amplified by using a sartorial fashion.

I just want to do my part in the evangelization of the men’s high fashion message. Because once you catch that particular buzz, it becomes a lifestyle rather quickly. Hopefully that can be accomplished via The Kind Sirs.

Q: HOW DOES THE KIND SIRS PLAN TO HELP OUR LOCAL COMMUNITY?

A: As I’ve said previously, we will be leading by example. Superior to being well dressed, is the aspect of well-doing. We are motivated men that want to make a difference.

First, I believe that our group can be mentors to the young men and boys in our community. We have plans of setting up afterschool programs for such a cause. The hope being that we can teach our gentlemanly philosophies. We can inspire them to be upstanding go-getters, and hopefully excite them about our tailored fashion sense.

Secondly, and as we know, homelessness effects this city greatly. We are looking to help those that are truly down on their luck by providing sponsorship opportunities. We’d like to partner with several businesses in the community and offer hard-pressed folks a full makeover, complete with interview-worthy attire. We’ll help them apply for jobs, offer interview coaching, and see them through to their eventual hiring.

These are a couple examples, but great is the goal. We just need to be out there as much as we possibly can.

Q: DO YOU HAVE A GATHERING OR EVENT YOU DREAM ABOUT HOSTING IN THE FUTURE?

A: I’ve always dreamed of having twenty or so of The Kind Sirs, dressed in full suit and tie, and sitting side-by-side in the lower bowl of a Utah Jazz game. It would be such a neat opportunity.

Q: WHAT ARE SOME LOCAL DESTINATIONS HERE IN SLC THAT SERVE AS INSPIRATION FOR THE KIND SIRS?

A: Well besides Vivint Arena (hint, hint to anyone out there that can help make that happen) there are many spaces that I wish to hold some sort of TKS event. Some of my personal favorites being: Curriculum barbershop, the rooftop at American Towers, Pallet, Finca, HSL, The Rest, Snowbird’s ‘The Summit on Hidden Peak’, Studio Elevn, Rio Tinto, Salt Lake Hardware Building, Grand America, private homes, etc.

In all honesty, events can work in almost any setting – so long as there is an educational theme taking place.

The Kind Sirs events are not just for getting fashionable men together, it’s about improving ourselves in many different areas – becoming well-rounded men. So for each of these venues, we intend to book a guest speaker; i.e. a barber speaking on grooming tricks, a chef explaining his/her process, a bartender teaching his/her favorite cocktail recipes, a business owner providing motivational insights, etiquette training, etc.

Q: HOW DOES ONE JOIN THE KIND SIRS?

A: The Kind Sirs is an exclusive club. So one would need to submit an inquiry via our website at TheKindSirs.com. After consideration, an interview process would then be scheduled with one or more of our members. If we feel as though a candidate might represent our values and style well, he would be invited to attend our next function as a pledge member.

Currently there are Pay-Per-Event costs that are divvied up amongst attending members – however annual membership fees are foreseeable.

We are also looking to expand (think of our club along the lines of a motorcycle club). We’ll be establishing gentlemanly chapters in many a city – even overseas. Each chapter will have a rank and file. All chapters will have a quarterly event requirement and charitable time and/or monetary donation minimums.

A: This club is for the chivalrous man who has an affinity for a sartorial, suit and tie fashion. It is all for the sake of connecting, doing good, and championing our gentlemanly message. We are strict in this message and this message alone. There are no other alternative and/or political agendas. Matter of fact – we are apolitical.

And, of course, if you’re like to commission a custom suit for an upcoming gathering at The Kind Sirs or any other occasion, we’re here to help — SCHEDULE A FITTING